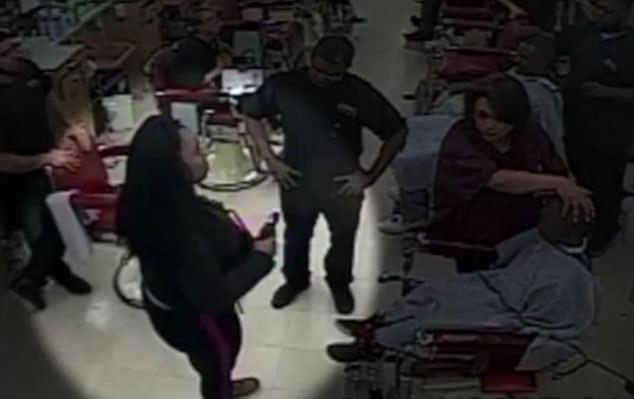 Furious mother pulls out a GUN on a barber who is ‘taking too long’ to finish her seven-year-old son’s $6 haircut!

A mother pulled a gun out on a barber who was taking too long to cut her seven-year-old son’s hair – telling them ‘for a $6 haircut, you’re doing all this?’

Police are now desperately looking to trace the woman who was seen on CCTV footage removing the pistol from her handbag.

She was waiting at The AllState Barber College in Cleveland, Ohio, but took exception to the time it was taking, according to a witness.

After the disagreement, she grabbed her purse and pulled out a black Glock 9mm pistol, according to News 5 Cleveland.

She added that the woman – who has not been identified – told staff members: ‘For a $6 haircut, you’re doing all this?’

Police are still trying to locate the woman who eventually left the barber shop with her son.

This cozy cinema was designed for snuggling