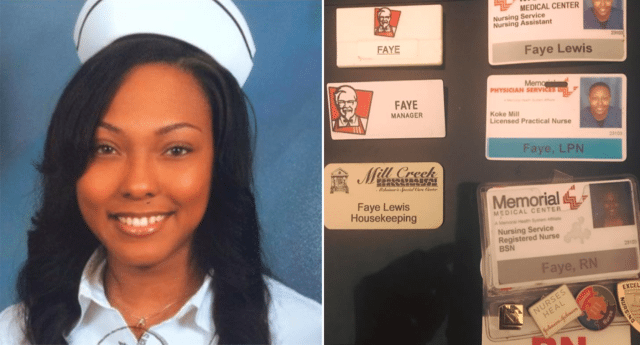 Faye Lewis has overcome some tough challenges to achieve her dreams, from tragic deaths in her family to working multiple jobs. Lewis shared a glimpse of her journey on Facebook, which took her from fast food restaurant employee to registered nurse.

On Sept. 6, Lewis posted a photo of all of the nametags and work IDs she has proudly worn throughout her journey to success. Her post went viral — it’s been shared more than 90,000 times — and is inspiring others to achieve their goals as well.

Lewis tells Yahoo Beauty, “It hasn’t been easy. It has been a longtime process.”

The 27-year-old shared the photo on Facebook to give herself motivation to push through the rough first weeks of graduate school where she is pursuing a doctoral degree in nursing.

“I just needed to remind myself how far I’ve come,” she says. “I never in a million years though it would also motivate other people to go for what they want.”

Lewis’s journey started over 10 years ago, when at 16 she got her first job as a KFC crew member. She used the money to help out her mom and dad and to have extra cash. But she always had her goals clear in her mind: “I knew I wanted to be a nurse,” she says. “I love to help people. I do it with joy in my heart.”

While she completed her high school education, Lewis continued working at KFC and then headed off to college. However, her education process has not been a typical experience — she had to stop after she became pregnant and gave birth to son AJ in 2010, and then went back to school.

“When I had him, it gave me even more strength to pursue my dreams so he can do the same,” she says. “My family really supported me and helped me make it possible.”

She continued working at KFC and even got promoted to manager. After getting an opportunity to be a housekeeper at a local hotel, she took that on as a second job. She performed both jobs while finishing her nursing assistant education.

Lewis then started working in the medical field. But she knew she couldn’t stop there. So she enrolled in school again to pursue her associate degree in nursing.

“I remember one of the first days of class, a professor said that many students lose their loved ones while in nursing school,” Lewis says.

The professor’s prediction sadly came true for Lewis. She lost her dad, cousins, and dog in a tragic house fire.

“One of my best friends called me hysterically crying,” Lewis recalls. “When I heard the news, I dropped to my knees. My mom made it out alive just by a miracle of God.”

Despite losing so many loved ones, Lewis never dropped out of school. She says it was her faith in God that helped her through the tough times. She graduated in 2014 with her associate degree in nursing and started right away to pursue her bachelor’s degree and graduated in May 2016.

“It was hard,” she says. “I had a lot of anxiety because of the tragedy that happened to my family. But I never gave up. I just pushed through.”

She says that doing it all while being a mom hasn’t been easy, but Lewis makes sure her son understands all of the sacrifices she makes so he can have a better life.

“He sometimes asks me when I am on my way out the door: ‘Mom, are you going to work or school?’ I smile because he knows how hard I work for him,” she says. “This was the first year I was able to take him to Disney World.”

On what advice she gives to people trying to reach their dreams, Lewis says, “Keep trying. Never give up and stay positive through all of it.”

Man who only wanted a shot of whiskey trapped in awkward situation when bartender...

Man Busted After Using His Own Wanted Poster For Facebook Photo