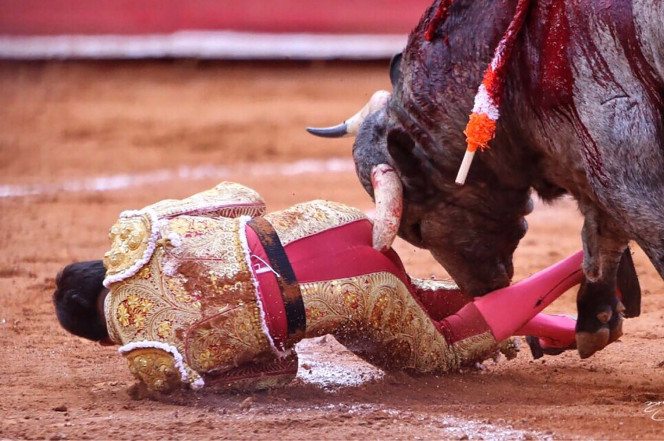 Bullfighter gets his anus stitched back together!!!

Doctors said the groggy 38-year-old toreador needed his entire anus and sphincter stitched back together after the animal’s 11-inch horn traveled into his nether regions.

“I have faith and hope in returning to feel and show that I can be someone important in the fiesta brava,” the sidelined toreador said, the Daily Star reported.

Horrifying video showed Romero seemingly in control as he taunted the bull, named Caporal — “leader” in Spanish — with a red cloth, called a muleta.

But something went wrong when he tried to get the bull to turn around him. The angry beast caught him on the arm and knocked him off balance before ramming its horn into his backside.

Romero survived Caporal’s punishment when other bullfighters jumped to his aid and distracted the enraged beast.

Paramedic Felipe Sanchez said: “It is a serious and deep goring approximately 30 centimeters.

He added: “We will operate it in the hospital.”

A similar incident took place earlier this year in Spain when a man was attacked during the annual Carnival of the Bull in Salamanca, Spain.

Footage of that incident showed the man being brutally stabbed in the buttocks by the raging bull. The 56-year-old man was reportedly rushed to a hospital for emergency surgery.

Drug Trafficking Suspect, 31, Disguises Himself as Elderly Man in Attempt to Evade Arrest

Girl, 14, cuts her brother’s girlfriend’s throat and tells her ‘Have a nice afterlife’

For the 2nd time in his life, guy is bitten on his Penis by...