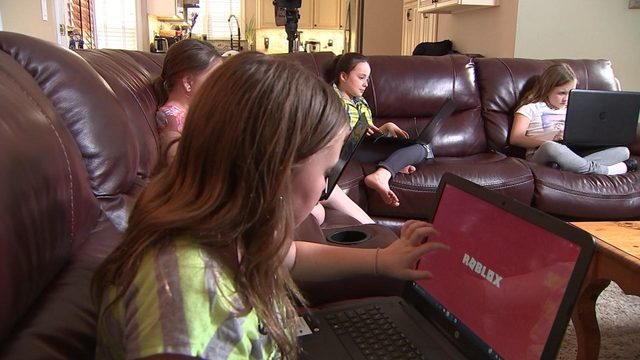 MaryBeth Reeves is used to a lot of chatting. The mom of quadruplet 10-year-old daughters says it’s rarely quiet in their home. What she wasn’t used to were the chats taking place while her girls played games online.

Her girls use Roblox, a multiplayer game site that allows players to communicate with each other.

“There’s a bunch of different people that can be on a game and then there’s like this chat that you can type in what you want to say, then you can communicate with other people say if you’re on a team,” 10-year-old Hannah Reeves explained.

Not long ago a few players stopped talking about the game and began asking the girls questions about themselves.

Her sister Isabella said someone asked her if she’d like to go out on a date. 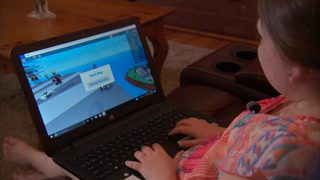 Reeves said she was unaware that was possible. She and her husband monitor their girl’s online activity closely. They have controls on each laptop and tablet that turn them on and off and allow them to track what sites the kids visit.

“When the first girl told me someone asked her out on a date I thought she was making it up,” MaryBeth Reeves said. “There was a sinking feeling in the bottom of my stomach.”

She immediately had a conversation with her girls.

“We just have to try to educate them as much as possible. Keeping them in the dark is not going to help them,” MaryBeth Reeves told Channel 2’s Dave Huddleston.

Sky Valley Police Chief Vaughn Estes told Channel 2 Action News that is the exact right approach for parents to take. Estes worked for the GBI in their high technology investigative unit and says pedophiles prey on children using subtle techniques to gain their confidence and lure them in.

“We’ve worked cases where people have talked children into doing things in front of their webcams that the parents walk into the room and they are horrified when they discover,” Estes said

He also says active parenting should be the first line of defense to protect your child.

“Know what your children are doing know what they are on. If they are in that room with that computer, you don’t know who is on the other side of that computer,” Estes said. “If their phone has a password on it and you, the parent, does not know it, then you need to get the phone away from them because there is nothing on there that a 14-year-old should not be able to show you.”

He says when parents are aware and kids speak up it makes investigating this type of behavior easier.

Channel 2’s Dave Huddleston also spoke with Eliza Harrell, a director with the National Center for Missing and Exploited Children. Harrell says while knowing what your kids are doing online is important, they also need to understand online gaming safety features.

“Most companies are more than willing to help,” Harrell said

Roblox, the site the Reeves girls use, filters out offensive language and allows parents to choose who their kids chat with or to turn chat off altogether. They also allow kids to report abuse and block players that ask offensive questions.

The company told us every abuse report is investigated and players can be banned from the site.

All 3 girls in the Reeves house who were approached blocked the player asking the questions, and one of them was able to report the activity before the player left the game.

MaryBeth Reeves says she’s thankful they spoke up and wants other parents to be prepared.

“Anything I can do to let other parents know that, that happens,” she said

Paramedic Puts on Ebola Biohazard Suit to Protect Himself from Skunk

Guy says he stole $7B because Jesus told him to