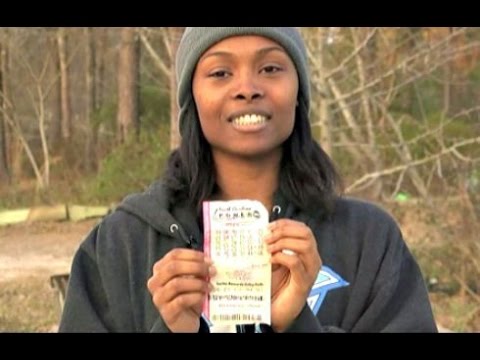 You may remember back in February, we were all excited to learn that Marie Holmes, the 26-year-old, single mother of four, had won the Powerball lottery.

Holmes, of North Carolina, decided that she was going to accept her $188 million winnings in one lump sum, meaning she was awarded $127 million. After taxes, she received $88 million. And while Holmes announced that she had plans to pay her tithes and set up college funds for her children, she’s ended up doing something entirely different with her riches.

Shortly after she won the money, Holmes posted $3 million bond for her boyfriend Lamarr McDow. McDow was in jail, facing heroin trafficking charges. McDow was implicated after an investigation unearthed more than 8,000 bags of heroin.

But Holmes found herself behind bars too recently. Last month, police came to her home to arrest McDow who had violated conditions of his parole by missing curfew. When officers searched the house, they found McDow had a .45 caliber pistol and there was less than a half an ounce of the drug and paraphernalia in Holmes’ Brunswick County home.

She then spent an additional $6 million to get McDow out of prison. He was released with a GPS monitoring device.

Two other people in the house were also charged with simple possession. Three children were present at the time of the arrest, McDow said they were his children.

According to WWAY, Holmes and McDow are engaged. And they also reported that Holmes took to the news station’s Facebook page to respond to criticism about the story which has been reported, for the most part, on local news outlets

“What Y’all need to be worried about is Y’all money and not how I spend mine this is benefitting Y’all how? And no he’s no drug dealer or user but who are Y’all to judge anybody? I will definitely pray for Y’all because it’s much need…they talked about Jesus so I’m not surprised Y’all are talking about me but be blessed though,”

This morning, when I first read the story, I was trying to give Holmes the benefit of the doubt. There are plenty of Black men who are arrested for little to nothing. But 8,000 bags of heroin is not nothing, even if less than an ounce of marijuana is.

While we can certainly question Holmes’ choices in both men and behavior, we really don’t have any right to tell her what to do with her money.

If there’s one thing I can’t stand, it’s for people to count other folks’ money. No matter who that person may be. We are generally too concerned with what other people are doing. She is right in that our perception of her squandering money really doesn’t benefit anyone, particularly since it was never ours to begin with. Sadly, that’s what happens with lottery winners. We seek to learn how these lucky people are spending money we wish we had. And a single, Black mother supporting her alleged drug-dealing boyfriend is local news gold. As it gives the average Joe a chance to turn his nose up at the rich.

If Holmes wants to spend up her newfound fortune on a man, in and out of jail, that’s her decision to make. If some of us are honest with ourselves, if we had $3 or $6 or $9 million dollars to give, we’d likely be bailing our loved ones out of jail too. Truth be told, it’s easy to shake our heads and wag our fingers in disgust and disapproval; but we’ve all done crazy, foolish and even expensive things for love.

This is how a dad responds when he found an empty whiskey bottle in...