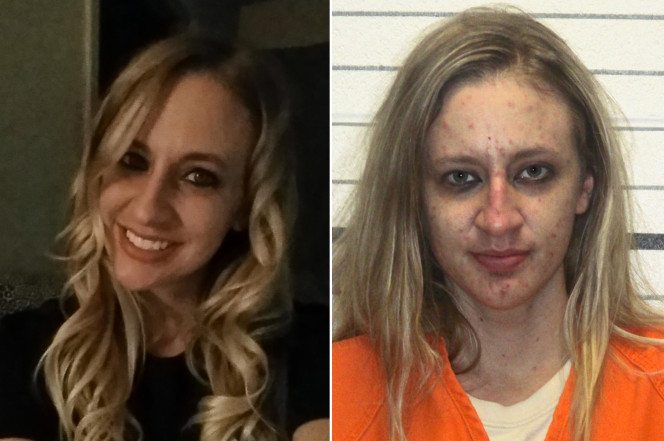 A teacher in Oklahoma already accused of bringing heroin and dozens of needles into her second-grade classroom is now facing additional charges in connection with the young students in her care.

Megan Sloan, 27, was arrested May 1 after another teacher at Holmes Park Elementary in Sapulpa reported finding Sloan discussing heroin and pawning school property on her Facebook account, which she left open on a computer, the Tulsa World reports.

Police later went to the school and found a plethora of drugs and drug paraphernalia in Sloan’s purse inside the classroom, including black tar heroin, methamphetamine, prescription drugs, syringes with exposed needles and burned metal spoons. An officer said he saw Sloan tell school administrators that she also took money slated for a field trip and used it to buy gas and drugs.

Sloan handed in her resignation on April 28, just days before her arrest earlier this month, according to public records obtained by the newspaper. Her resignation was to take effect on May 16, one day after the school’s final day of classes.

Superintendent Rob Armstrong notified Sloan on May 2 that she was being suspended from her job with full pay and benefits. The school board voted to accept her resignation during a meeting the following week, the paper reported.

Police have said Sloan admitted using drugs even before investigators searched her purse and found a collection of drugs and drug paraphernalia.

“She says her kids have never had access to her purse,” Sapulpa police Lt. Philip Diehl told News 9 after Sloan’s arrest. “This particular morning the purse was left in the classroom, because as soon as she arrived at work, she was called down to the office, and so she set her purse down and left.”

Diehl estimated that up to 40 syringes were found in Sloan’s bag, some of which still had liquid in them. The purse also contained empty plastic baggies, empty balloons and two bent metal spoons with burn marks on them, according to court records.

Sloan’s appearance in her mugshot following her arrest shows a starkly different image than earlier photos posted on her Facebook page. The pretty blonde is seen in several photos with young children, some posted as recently as last month. Sloan started working at Sapulpa Public Schools in July 2014, according to her profile.

Bungee Jumper Dies After Striking His Head on the Ground

FBI Director Says You Should Cover Your Webcam With Tape

Two children fight for their life after mother, naked, shoots them in the head...