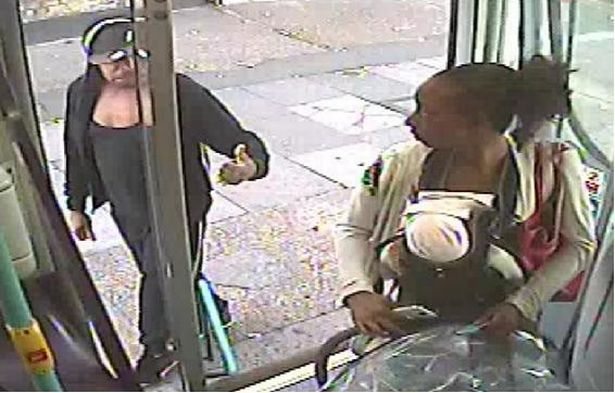 Rosalin Baker, 25, boarded the bus with little Imani’s corpse strapped to her chest and remained calm for 20 minutes before raising the alarm.

This harrowing footage shows the moment a mum boards a bus with her baby’s dead body as her boyfriend gives her the thumbs up.

Rosalin Baker, 25, topped up her Oyster card in a convenience store before getting on the bus to stage baby 16-week-old Imani’s death.

The youngster had already been dead for hours after suffering a fractured skull and brain injuries.

In the footage, failed rapper Jeffrey Wiltshire, 52, gives Baker the thumbs up as she boards the number 25 in Stratford, east London, with the body of little Imani strapped to her chest.

Imani’s wrist was broken by her arm being twisted and she suffered 40 rib fractures when her tiny body was squeezed in her parents’ cramped bedsit in Manor Park, east London.

A jury at the Old Bailey deliberated for 14-and-a-half hours before clearing the couple of murder, but found them guilty of causing or allowing the death of their daughter, who was on the child protection register.

CCTV captured former music producer Wiltshire kissing Baker goodbye and giving her a ‘good luck’ hand gesture as she hopped on the bus after topping up her Oyster card on the morning of September 28 last year. 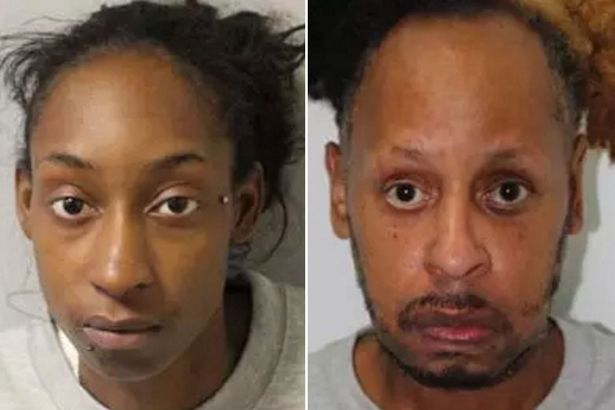 Baker sat texting on her mobile phone for some 20 minutes before raising the alarm, but remained “cold and calm” as panicking passengers tried to save her daughter’s life.

But experts believe Imani, who had weighed just 1lb when she was born, had already been dead for hours when she was rushed to Newham General Hospital.

Baker claimed Wiltshire had caused their child’s horrific injuries before forcing her to get on the bus in a bid to frame her.

Wiltshire denied ever having been violent towards any of his 25 children – two of whom have died – or the 18 women who gave birth to them and said he had no idea how Imani had been killed.

A jury of eight woman and three men today acquitted the pair of murder after 14 hours and 28 minutes of deliberations, but found them guilty of causing or allowing the death of a child.

Judge Nicholas Hilliard QC adjourned sentencing until next month, telling Baker and Wiltshire: “That child’s life must have been painful, distressing and bewildering and the failure, at the very least, to protect her is a very serious matter indeed, which can only result in a substantial custodial sentence.”

Baker said she was “petrified” of her boyfriend, who controlled their benefit payments, stopped her leaving with threats of violence and regularly dished out savage beatings when he didn’t have his drugs.

“At the beginning he was slapping me and then he started to punch me. Sometimes he would punch me or pick up objects,” she said.

“He used to use the handle part of a knife and he picked up a hammer before.”

Wiltshire said “I was pleased, because, you know, I’m still firing” when he found out Baker was pregnant, but she claimed it was his violence towards her that had brought about Imani’s premature birth on June 2 last year.

Baker visited Imani just 16 times over the 64 days she was in hospital, whilst Wiltshire did not visit his daughter once.

Imani was made subject to a child protection plan under the category of neglect on August 16, 2016 and Baker, who had been known to social services for years, agreed she would live with her mother in Colchester, Essex.

But she instead went to live in Wiltshire’s tiny bedsit, where Imani fell victim to at least three severe assaults in the nine says before her death.

Prosecutor Duncan Atkinson QC said: “As Imani was being squeezed so that her ribs fractured she would have expressed distress and fear and pain, certainly before she also suffered the injuries to her brain.

“Anyone in that tiny space could not have missed it.

“Anyone present when her arm had been pulled and twisted and her wrist fractured would not have been able to miss it.”

Yet Baker insisted she had not noticed anything unusual about her daughter, except for a mark above her eye.

She said the baby would often be crying when she returned from shopping trips having been left alone with her father.

Baker claimed she screamed when she awoke on the morning of September 28 last year to find Imani’s face and hands cold and immediately thought: “He’s done something to her.”

He also said he had noticed a slight mark around Imani’s eye and believed she had breathing difficulties, but had not known anything was seriously wrong when Baker boarded the number 25 bus on Romford Road at 9.34am.

Mr Atkinson said: “She was waved off by her partner, who gave her a thumbs up as the bus moved away.

“During the course of the bus journey Baker suddenly sought help from her fellow passengers for a problem that she said she had just identified with her daughter.

“Those members of the public, presented with the nightmare of an infant who was not breathing, did all they could to help.

“They were panicking and distressed. In contrast, Baker was cold and calm.”

Paramedic Anthony Steadman, who raced to the scene, said in his 18 years in the job, he had never seen a parent react the way Baker had to their dead or dying child.

“The mother displayed no emotion, there were no questions asked,” he said. “I had never seen that reaction from a parent before – she lacked emotion and appeared to be disengaged from what was happening.

“From my impression, she seemed cold – the only emotion she showed was when we said we were going to leave the scene.

“Then she was very vocal until she had swapped her mobile phone with her sister.”

PC Georgia Ross described how Baker sat texting on her mobile phone as doctors battled for 40 minutes to save Imani’s life, adding: “She didn’t once ask how the baby was.”

Baker and Wiltshire were arrested on the afternoon of September 28 and both lied to police, even denying Wiltshire was Imani’s father.

In court, Baker blamed her boyfriend for Imani’s death, telling jurors he had also undressed the dead baby, changed her nappy and put her in new clothes.

“I was scared, I was shocked. I didn’t know what to do. I was just crying, stood there,” she said.

“Jeffrey picked up Imani and put her inside the harness. As he was doing that he was saying, ‘I’m sorry, I’m sorry’.”

She said she was so scared of Wiltshire she went along with the plan, adding: “When I was sat on the bus all I could think of was, ‘he tried to frame me for killing my own baby’.”

But Wiltshire said he had no idea Imani was dead until he was arrested for her murder.

“I can’t describe it. That’s never happened to me before,” he said.

Baker and Wiltshire, both of Morris Avenue, Manor Park, east London, denied murder and causing or allowing the death of a child. They were acquitted of murder but found guilty of the less serious offense.

Cops Pull Her Car Over, Then Mom Says ‘It’s Between The Tags And Groceries’